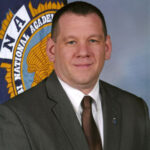 In June 2015, Patrol officers responded to a residence in reference to a domestic assault, having had calls there prior the officers knew the suspect had several felony warrants. Upon arriving at the residence the subject had believed to have fled into the basement of the house. Officer formed a small react team with a K-9 and handler. The K-9 was sent to search the basement and as the react team was responding downstairs they heard what appeared to them to be a gunshot, the suspect then came around the corner and appeared to be brandishing a shotgun and made threats to shoot the officers.

The officers backed out of the basement and Swat/CNT were notified. The initial call was that a K-9 was down and possible shot by the suspect. 3-4 hours of negotiations were conducted over the armored cars PA system with no communication from the suspect. The suspect finally made contact with the Swat perimeter team and the dog was released. The negotiators throw phone was deployed which lasted in another 4 hours of negotiations. The subject several times stated that he would not come out and that he was going to go down in a blaze of glory. Due to the fact that the subject had barricaded the stairway and was armed there was no way to make a safe Swat entry into the basement.

After about 8 hours gas was sent into the basement and the subject began to respond to suggestions of exiting the basement, however he had barricaded so well he could not move the items out of the way. After several plans were developed it was decided that he would squeeze through the barricade and surrender which he did. The incident happened next to a major interstate Hwy and in the middle of a city’s main street which resulted in hundreds of people and news media showing up to the scene. Incident happened summer after Ferguson riots which also played into media presence.

Lessons learned:
Be prepared to deal with large presence of media and citizens
Prepare for different communication platforms (PA/Voice to Voice and Phone)
Be aware of how you setup your Negotiations Operations Center
Don’t let emotions dictate how you react to demands made by the suspect
Be Persistent